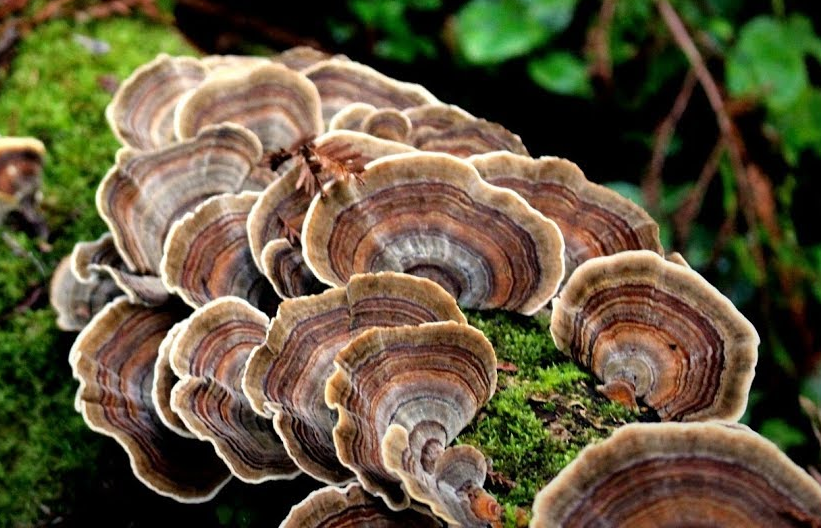 Turkey Tail is a medicinal mushroom that grows abundantly throughout the forests of Ontario and the world. It’s incredibly common and rather easy to identify. Like other medicinal mushrooms, it has polysaccharides, (mushroom sugars) called beta-glucans. Polysaccharide K (PSK) is it’s best known active compound.

In Japan it has been studied as far back as the 1960’s where it’s been used as the primary treatment for cancer patients. Today it is becoming common in Western medicine as an adjunctive therapy in cancer treatment as well.

In a nutshell, Turkey Tail is a powerful immune booster. The beta-glucans responsible for it’s immune boosting properties are part of the mushrooms cell wall structure. These sugars are very large molecules with numerous proteins chains (called lectins) attached. Many of these protein chains act like ‘keys’ that bind to the cell wall of other micro-organisms and pathogens.

When we consume Turkey Tail polysaccharides, our immune system is able to use these lectin ‘keys’ to help identify pathogens in our own body.

Because Turkey Tails is such a common mushroom that is easy to identify, you can easily make your own immune boosting Turkey Tail extract. Just simmer it in hot water for about 2 hours. A fist full of Turkey Tail (about 50 grams) will produce about 3500mg of extract (about 10 therapeutic doses).

But here’s a tip for those who are serious about making Turkey Tail extract. Though the mushroom is as tough as wood, an incredible 70% of it’s mass is composed of beta-glucans. Unfortunately, they are so tightly bound to the cell wall that simply boiling the mushroom only extracts a tiny amount (about 10%).

However, using a pressure cooker will break down the cells walls and extract a lot more. Interestingly, the additional polysaccharides being extracted are those which have a high molecular mass which seem to correlate with greater medicinal potency.

A good procedure to follow is to combine 50g of turkey tail with 3L of water and pressure cook it for 2 hours. Then repeat this process about 10 times (yes, 10 times!). This will extract an astonishing 35g from the original 50g of Turkey Tail mushroom.

If you happen to be diligent enough to go through all this work then here’s one more tip. Leave the extract as a liquid. Turkey Tail polysaccharides are so large and viscous that much of it won’t re-hydrate again once it’s been dried. This impairs it’s bio-availability. However, leaving the extract in it’s water soluble state provides an extract which is more potent than any other Turkey Tail extract available commercially. And the flavour is surprisingly good!

So go find some Turkey Tail and try making your own mushroom extract. It’s easy and your immune system will love you for it.